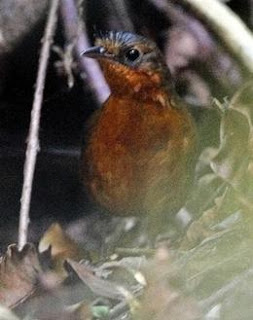 Rediscovered in 1995 - May be just 15 birds alive
The Stresemann's Bristlefront is one of the world's most threatened bird species - unrecorded for 50 years until it was rediscovered in 1995 near Una, Bahia, in Brazil's Atlantic Forest region. The world population estimate is fewer than 15 individuals. Its population is declining owing to fires, logging, and the clearance of humid valley-floor forest for cattle ranching and agriculture.

Nest tunnel
On October 30, 2012, Dimas Pioli and Gustavo Malacco, two Brazilian researchers visiting Fundação Biodiversitas' Mata do Passarinho Reserve discovered the bird's nesting tunnel entrance, a tennis ball sized hole, located about three feet from the ground in an exposed dirt vertical edge that contained overhanging vegetation. Nesting tunnels are typical for the ground dwelling Tapaculo family, to which the Bristlefront belongs. The hole is estimated to be approximately six feet deep. It was surveyed and filmed with a micro-camera and further data should be published shortly in an ornithological journal.

Probable chicks
"This is the discovery of a lifetime made all the more gratifying by the fact that not only have we found live adult birds, but we have also found strong evidence of several chicks as well," said Alexandre Enout, the Reserve's Manager. "It is urgent that we protect more of the natural Atlantic Forest in this area and reforest areas where forest has been lost. The best way to save this species is by increasing its potential habitat."

Stresemann's Bristlefront
The 8-inch long, medium-sized, long-tailed bird has distinctive, long, pointed forehead bristles and a slender dark bill. The female is cinnamon-brown above, with duskier tail and is a bright cinnamon-rufous below.