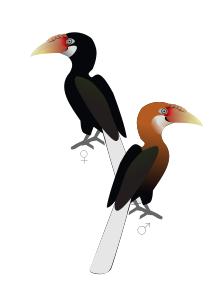 Saving Narcondam Hornbill is on radar of the Indian Government - Courtesy of Birdlife
September 2012. On a remote volcanic island in the Andaman Sea, surrounded by coral reefs and carpeted in thick forest, Narcondam Hornbill makes its home. In fact, the tropical evergreen forest on the 12km2 Narcondam Island is the only place in the world that this species is found, giving it one of the smallest natural ranges of any bird species in the world.

Population of less than 250 adults
With a population of just 50-249 mature individuals, this small, distinctive, dark hornbill is classified as Endangered. The island, which is situated within the Andaman and Nicobar Island group, has been a recognised wildlife sanctuary since 1977 and is an Important Bird Area. Due to conservation efforts and limited threats, the population is stable at the moment, but it is extremely susceptible to new threats and natural disasters because of its size and range.