Triumphant return? ‘Alala to be released into the wild later this year 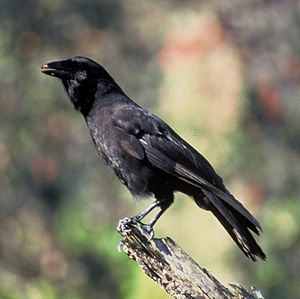 An ‘alala, which is extinct in the wild, stands on a perch at in Volcano.

By TOM CALLIS Tribune-Herald
It’s almost time for the ‘alala to once again spread its wings over ’s forests.
Hawaii’s last remaining native crow species, extinct in the wild for about 14 years, will begin to be released from a captive breeding program in September, with a dozen in all to be offered freedom by year’s end to seed what biologists hope will be their comeback.

“The ultimate goal is a self-sustaining wild population of birds,” said John Vetter, a wildlife biologist with the state Department of Land and Natural Resources. “We expect that will take a number of years. It depends how successful we are.”

Success is not guaranteed.

The birds, which forage in undergrowth, face a number of threats in the wild, including feral cats, mongooses and rats. The ‘io, or Hawaiian hawk, also is a known predator.

An earlier attempt to release ‘alala in in the 1990s proved unsuccessful as the birds became susceptible to disease and predation. Of the 27 captive-raised juvenile birds that were released, 21 died and the remaining six were recaptured.

Vetter said the state hopes for better success this time around, with a larger breeding program and plans to release the birds in the Pu‘u Maka‘ala Natural Area Reserve near Volcano.

He said the area is fenced to keep out ungulates, allowing for a more mature undergrowth, which the ‘alala rely.

“We think that will help ‘alala with escape routes for ‘io,” Vetter said. There also might be fewer threats for juveniles from non-native predators.

was selected previously because there were known wild birds in the area at the time, he said. No wild ‘alala have been seen since 2002.

The captive birds — 114 in all — are raised at the Keahou and bird conservation centers, operated by the San Diego Zoo.

The birds that will be released haven’t yet hatched.

http://www.hawaiitribune-herald.com/news/local-news/triumphant-return-alala-be-released-wild-later-year
Posted by CFZ Watcher of the Skies at 3/01/2016 07:42:00 pm