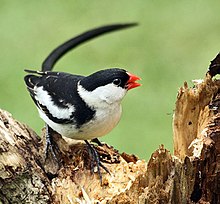 Invasive parasites are a biological oxymoron. And yet, they are in our backyards! This study analyzes the case of a brood parasitic bird, the pin-tailed whydah (Vidua macroura) and its recent spread into the Americas!

Biodiversity hotspots -- or places with large numbers of species found nowhere else on earth -- also tend to make suitable habitats for invasive species that can, in turn, destabilize ecosystems and supplant indigenous biota. A new study in The Condor: Ornithological Applications predicts where the pin-tailed whydah, a songbird native to sub-Saharan Africa that has expanded its natural range thanks to the pet trade, may next spread in North America and Hawaii.

The pin-tailed whydah is a brood parasitic bird that lays its eggs in other bird species, typically small African finches, and has been introduced from Africa to Puerto Rico and southern California. In this study, researchers used species distribution models to predict where the whydah may continue to spread in the continental U.S., Hawaii, and the Antilles. To determine the whydah's potential distribution, they used sightings of this species reported to the Global Biodiversity Information Facility (GBIF). The investigators then identified suitable whydah habitat by finding correlations between locations where these finches have been seen and global climate data. As brood parasites, whydahs need hosts to complete their life cycle, so the researchers also used the presence of six known host species that have been co-introduced in the whydah's new range to predict suitable habitat. Their species distribution model indicated high habitat suitability in areas of high biodiversity where whydahs do not currently live, including the West Coast of the U.S., Hawaii, and most islands of the Antilles.