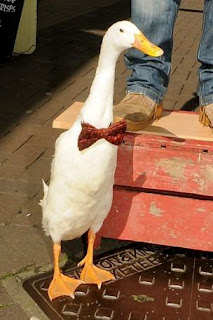 Together Barrie and Star collect on average £200 a day by visiting businesses around Devon and have already raised £6,500 for a local children's hospice.

However the duo's fundraising days could be numbered after being told they must apply 28 days in advance for a single day's permit- restricting them to collecting just one day a month.

'If I was putting into my own pocket, I could understand it, but everything goes to the sick children,' explained the Bideford resident.

'If a permit covered me for a year and I was able to visit a different town each day, that would be fine, but on this basis I don't think I can carry on.'

Council officials told Mr Hayman that members of the public could find his feathered sidekick 'irritating'.

Local businesses have slammed the decision and are calling for Star to be allowed to collect money as often as possible.

'He entertains so many people. They crowd around him, and he does an amazing job,' Sally Shephard, of Blazeys Deli in Bideford, said.

'We all feel very upset because it's such an amazing charity. Everyone's in uproar.'

A North Devon District Council spokesman added: 'All he's got to do is apply for a street collection permit, which is a fairly simple process.

'Our policy is to allow one charity collection per day per parish, so that the streets aren't full of people collecting for charity, which is irritating to the public.'