RSPB member gives nature a home in an unexpected place


July 2013. RSPB member Jim Nisbet received a surprise when he looked into his old golf bag to find an enterprising robin had built a snug nest for itself amongst the clubs. After discovering the clever hideaway, Jim left it undisturbed and several weeks later the bag became home to a healthy brood of five robin chicks. 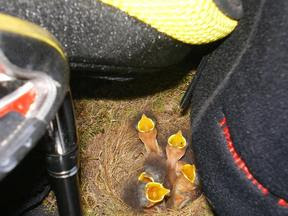 Jim, from Burnside in South Lanarkshire, said: "Over the last few years a robin has visited the garage and nested, but this year the choice of my spare golf bag was a rather unexpected site. (What would he have done if it hadn't been his spare set? - Terrible dilemma. Ed.)