Leucistic moorhen in Cumbria
June 2012. Reader Peter Bagnall has kindly sent us this image of a white, leucistic Moorhen at the Dalton Wildlife Park in South Cumbria. 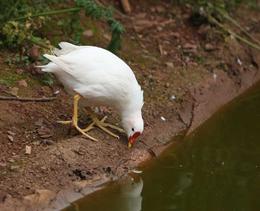 Leucism (or Leukism) Leucism is a very unusual condition whereby the pigmentation cells in an animal or bird fail to develop properly. This can result in unusual white patches appearing on the animal, or, more rarely, completely white creatures.

Click here to see our gallery of albino and leucistic animals and birds.
Wildlife Extra has received several reports over the last few years about leucistic moorhens, mostly from the north west of the UK.