A swan owned by the Queen has been found barbecued on the banks of the Thames in the shadow of Windsor Castle.

The Royal bird was found on Baths Island, in the middle of a picnic area popular with children and tourists. 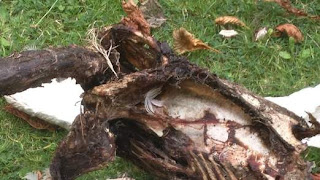 It had been cooked with its feathers still attached, and meat had been stripped from its carcass.

Park wardens made the gruesome discovery in Windsor, Berkshire, at 3pm on Sunday, and called Swan Lifeline, which cares for sick or injured birds along the Thames.

Wendy Hermon, treatment centre co-ordinator for Swan Lifeline, told Sky News Online: "They were in the middle of their walkabout when they phoned us to say we've found what looks like the remains of a cooked swan.

"It's absolutely disgusting doing something like that. We've heard for years that sort of thing goes on; we've never actually seen it.