$85,000 in restitution to be managed, as it becomes available, by the International Crane Foundation to further Whooping Crane conservation

February 2013. The International Crane Foundation (ICF) is very pleased and relieved that an appropriate sentence was issued to the man who shot an adult male Whooping crane in South Dakota last April. The migrating adult crane was one of fewer than 300 individuals remaining in the Aransas/Wood Buffalo population, the only self-sustaining wild population of Whooping cranes in the world. 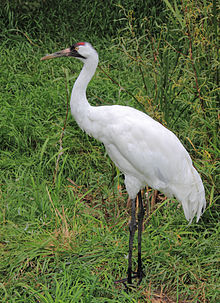 Sentence
Jeff Blachford, 26, was given a sentence that includes $85,000 in restitution (Compensation), 2 years probation, confiscation of his hunting rifle, and removal of his hunting and trapping rights anywhere in the U.S. for 2 years. Read full sentencing details here.

"Today, hunters and other citizens are receiving a clear message that there is a real price to shooting an endangered species," notes Dr. Richard Beilfuss, President & CEO of the International Crane Foundation.

Because of ICF's leadership and experience in crane conservation, the USFWS has decided that the restitution money, as it becomes available, will be managed by ICF to further Whooping crane conservation. To address the continued threat of illegal shooting to the recovery of Whooping crane populations, ICF and our partners are expanding their educational outreach to students, hunters and the general public across the Whooping cranes' range. The goal is to increase awareness, understanding and appreciation for these natural treasures.

To learn more about ICF's ongoing conservation efforts for these birds, visit: www.savingcranes.org/whooping-crane-conservation.html.