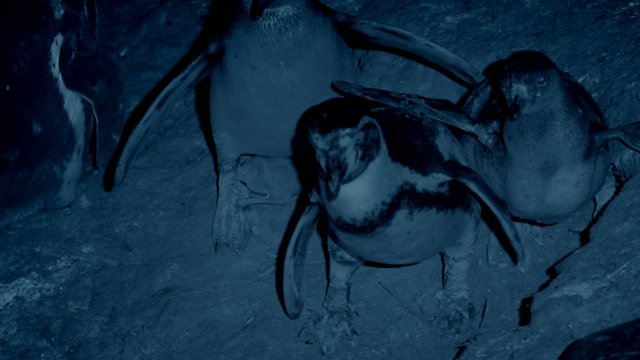 The team travelled to the outskirts of the Atacama Desert in Peru to record how the penguins interacted with other species.

Despite anecdotal evidence of the bats attacking penguins, the behaviour had never been recorded before.

The extraordinary footage features in the BBC One series Penguins: Spy in the huddle.

Humboldt penguins breed in coastal South America where they hunt fish in the cold waters of the current also named after the German naturalist Friedrich Humboldt.

The production team were first drawn to the location by the abundant wildlife, particularly the penguins' survival struggles against a neighbouring colony of 20,000 predatory sea lions.
Although they witnessed vampire bats feeding on the sea lions, it took patience and specialist kit to witness them attacking penguin chicks.

Producer Matthew Gordon admitted that when they first began filming, they were sceptical that the bats fed on penguins.