NASHVILLE, tenn. — Millions of birds have descended on a Kentucky city, fouling the landscape, scaring pets and raising the risk for disease in a real-life version of Alfred Hitchcock's film, "The Birds."

The blackbirds and European starlings blacken the sky of Hopkinsville, Ky., and turn the landscape white with bird feces. The disease they carry, histoplasmosis, can cause lung infections and symptoms similar to pneumonia, according to the Centers for Disease Control and Prevention. 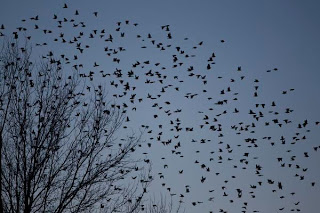 "There are enough that if the sun is just right, they'll cloud your vision of the sun," said Hopkinsville-Christian County historian William Turner. He said it's the worst invasion he's witnessed since the late 1970s.

David Chiles, president of the Little River Audubon Society, said migratory flocks are roosting in the city rather than flying farther south because of climate change.

The city has hired a pest-control company to get rid of the interlopers. Henry Jako, general manager of McGee Pest Control, said crews use air cannons and "bird-bangers" — similar to bottle-rocket fireworks aimed where the birds roost.