Feb. 13, 2013 — A new University of Alberta study shows that busy beavers are helping Canada geese get an earlier start when the birds fly home and begin spring nesting.

Ponds in Alberta where beavers were active tended to result in earlier thaw of winter snowpack, giving the geese a better chance at reproductive success, according to the study, published recently in Mammalian Biology. 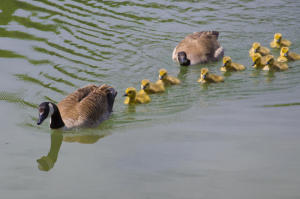 The study is the first to link beavers to early season nesting habits of Canada geese in a Northern climate.

A team led by Glynnis Hood, an associate professor in the Department of Science at the U of A's Augustana Campus, surveyed 32 active and 39 inactive beaver ponds at Miquelon Lake Provincial Park in east-central Alberta.

The study showed that open water occurred 10.7 days earlier in active beaver ponds, especially the water that was next to main beaver lodge entrances and food caches. As well, snowpack was on average almost six centimetres shallower in active ponds.

The activity of the beavers warmed and thawed the water, which makes it more welcoming habitat for the geese to nest, Hood said. The open water and the active ponds, which housed island lodges, provided food resources and nests away from land predators for the geese.