Caledonia, one of the two satellite tagged young sister ospreys that fledged from the Loch Garten nest last summer, is enjoying some winter sun in Seville.

As well as being tracked by satellite, the charity has recently had visual confirmation too.

RSPB Scotland site manager at Loch Garten, Richard Thaxton, said : "Caledonia - named by the pupils of Deshar School – left the strath last August and arrived in Seville in mid September, and she has chosen to remain there ever since. 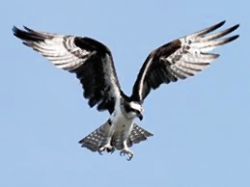 "This is considered unusual for first year birds, which whilst certainly passing through Spain, have always been thought to continue their migration further south to West Africa.

"Caledonia however, has opted to stay in Seville, and so far anyway, not venture any further."

Mr Thaxton added: "We are pleased that our juvenile Caley has chosen to stay in Spain so far, because sadly sister Alba perished in late November in Senegal, as have other tracked ospreys over the years.

"So we are hoping Spain perhaps offers a safer option, with richer pickings and less competition perhaps from other ospreys and other fish-eating birds down in the Tropics."