A new owl species from Indonesia is formally described

A new species of owl discovered in Lombok, Indonesia, has been formally described by scientists.

The "common" owl is the first endemic bird species recorded on the island of Lombok.

The first study of the species, by an international team of scientists, is published in the journal PLoS One.

"I was on Lombok to collect sound recordings of the local population of a species of nightjar. On the first night I arrived on Lombok, we heard the vocalisations of an owl that [I was] not familiar with." 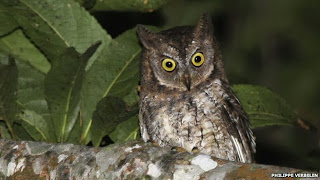 Coincidentally researcher Ben King, from the Ornithology Department, American Museum of Natural History in New York, USA, was in Lombok at the same time, recording the same nightjar species even though the researchers had never met.