Feb. 20, 2013 — A male fairy-wren's low pitch song indicates body size, a new international study has shown. The study led by University of Melbourne researcher Dr Michelle Hall, is the first to show that the larger the male fairy wren, the lower the pitch of his song.

"This is the first time we have been able to show that song pitch indicates body size in song birds," said Dr Hall from the University's Department of Zoology. 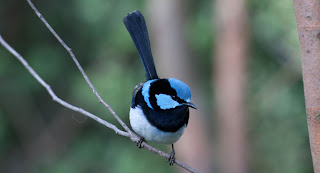 The study, which began when Dr Hall was at the Max Planck Institute for Ornithology in Germany, has been published February 20 in the journal PLOS ONE.

Reliable communication about body size between animals is particularly important when communicating with mates or rivals. For example the bigger the rival is, the more likely it is to win in a fight so a song pitch indicating a large size may deter rivals.

"Surprisingly, there is very little evidence that the pitch of calls indicates body size differences within species, except in frogs," she said.

"In birds in particular, there has been no evidence that the pitch of songs indicated the size of the singer until now."