Jan. 31, 2013 — University of Utah researchers decoded the genetic blueprint of the rock pigeon, unlocking secrets about pigeons' Middle East origins, feral pigeons' kinship with escaped racing birds, and how mutations give pigeons traits like a fancy feather hairdo known as a head crest.

"Birds are a huge part of life on Earth, and we know surprisingly little about their genetics," especially compared with mammals and fish, says Michael D. Shapiro, one of the study's two principal authors and an assistant professor of biology at the University of Utah. "There are more than 10,000 species of birds, yet we know very little about what makes them so diverse genetically and developmentally."

He adds that in the new study, "we've shown a way forward to find the genetic basis of traits -- the molecular mechanisms controlling animal diversity in pigeons. Using this approach, we expect to be able to do this for other traits in pigeons, and it can be applied to other birds and many other animals as well."

The study appears Jan. 31 on Science Express, the website of the journal Science. Shapiro led the research with Jun Wang of China's BGI-Shenzhen (formerly Beijing Genomics Institute) and other scientists from BGI, the University of Utah, Denmark's University of Copenhagen and the University of Texas M.D. Anderson Cancer Center in Houston. 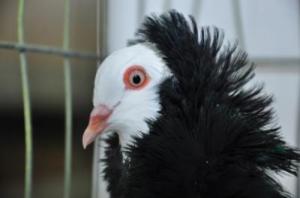 This is a rock pigeon of the breed old Dutch capuchine, which has a kind of head crest known as a mane. More than 80 breeds out of some 350 breeds of rock pigeon have head crests, which form when head and neck feathers grow upward instead of downward. Scientists from the University of Utah, BGI-Shenzen in China and other institutions decoded the genome or genetic blueprint of the rock pigeon, then found that a single gene mutation linked to the head crest trait.
(Credit: Michael D. Shapiro, University of Utah.)