SANTA CRUZ, Calif.- Wildlife Emergency Services rescued a thin and weak gull Monday afternoon who was tangled in a white string, which was twisted tight around its tongue.

Wildlife Emergency Services, or WES, said the bird was frightened and could barely put up a fight. WES, a local animal rescue organization, said the bird could have been tangled in the balloon-like ribbon for more than a week. A person notified the group to the animal's distress at  in . 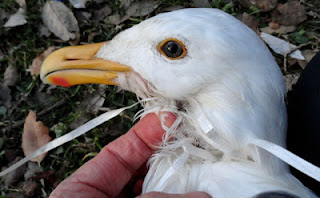 WES founder Rebecca Dmytryk said she suspects it was an intentional act of cruelty. Dmytryk said the adult Western gull was found on the edge of the pond with a baseball-size bulge in its throat - perhaps food it could not swallow.

Rescuers were able to get the gull safely stowed inside a cardboard carrier and took it to the Native Animal Rescue center in . There, the bird received immediate attention by hospital staff.

Dmytryk said in her news release online, "they found the line coming out of the gull's mouth was twisted tight around its tongue. Once the line was cut, they removed the putrid mass of food from its throat. The bird was hydrated and given the night to rest."