To professor Zhou Fang of Guangxi University's College of Animal Sciences and Technology,the discovery of Nonggang babbler (Stachyris nonggangensis) shows that Nonggang is a conducive natural habitat for the rare bird.

He and Jiang Aiwu, one of his graduate students, first saw the bird during a survey at the endof 2004. It took almost four years of study and fieldwork to confirm it's a new species. 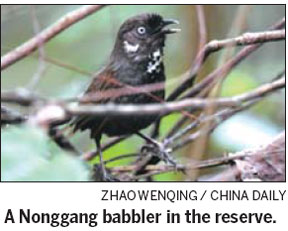 According to the ornithologist, French missionaries from Vietnam visited the area as early asthe 19th century. Many of them were zoologists and botanists like Father Armand David, who isbest known for discovering the giant panda and introducing Pere David's deer to stately parksin Europe.

"No one mentioned a bird like Nonggang babbler," the professor says.

Between 1979 and 1980, a comprehensive bird survey was held in the reserve. Theparticipants had six shotguns to shoot any birds they were interested to collect specimen, butthey failed to find the Nonggang babbler.

"I have been studying birds in the region since the 1970s," the 64-year-old ornithologist says. "But I had never seen it before."