Every year the Department of Conservation (DOC) collects kakī eggs from the wild for safe incubation at the Captive Breeding Centre in Twizel. Nearly half (46%) of all eggs taken this summer were collected from farmland in the Mackenzie and Waitaki basins with the cooperation of farmers. 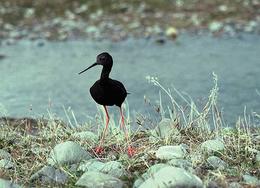 "We put the word out that we needed help to locate adult breeding pairs so we could collect eggs and got a fantastic response. We had one farmer who rang up to say he had found four eggs and he'd wait until we picked them up before moving his sheep into the paddock."

Ben Avon Station owner, Jim Morris, whose property in the Ahuriri valley also had breeding birds, says that this anecdote shows that conservation and production can work together with thought and effort from all parties.