The U.S. Fish and Wildlife Service has delayed a decision on the endangered species status of the lesser prairie chicken, and reopened the public comment period on the proposed listing for the threatened prairie grouse, which at one time was one of the most populous gamebirds on the southern plains, but now hangs on in just a few areas. 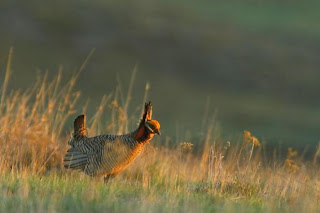 The U.S. Fish and Wildlife Service reopened to public comment the potential listing of the lesser prairie chicken on the federal protected list. U.S. Rep. Michael Conaway of announced the move after he and seven other House Republicans requested a delay of at least 90 days in the decision on designating the grouse as a threatened species under the Endangered Species Act. They say protecting the fowl would impair oil and gas development, agriculture and other sectors that drive local economies. Experts say the lesser prairie chicken population has declined in part due to expanded farms, ranches and oil and gas operations across the Southwest and other states.

is the lone remaining state that offers a general hunting season on lessers, which is remarkable considering just how many prairie chickens there used to be in the birds' historic range of , , , and . Anyone ever get the chance to hunt lessers in your state before the season was closed?

http://www.fieldandstream.com/blogs/field-notes/2013/03/delay-lesser-prairie-chicken-endangered-species-status
Posted by CFZ Watcher of the Skies at 3/07/2013 10:02:00 am