SEVERAL springs ago some friends and I arose before dawn in Moab, Utah, to witness the sunrise mating dance of the Gunnison sage grouse: a surreal display of nine ornately plumed, chicken-size birds tottering about amid the sagebrush like windup toys, fanning their spiky tails and uttering a magical sound — “pop ... pop-pop!” — as they thrust yellow air sacs out of their snow-white chests.
Now as I look back, I realize I might have been inadvertently paying my last respects. For the Gunnison sage grouse, only recently known to science, is going extinct, right before our eyes. 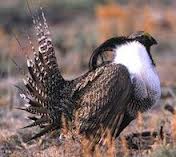 The United States Fish and Wildlife Service has a chance to stop this by listing this bird as endangered under the Endangered Species Act, and I strongly encourage the agency to do so immediately.
The Gunnison sage grouse received its common name in the year 2000, after several astute scientists recognized that its long crown plumes and elaborate mating display were completely different from other sage grouse. It was the first new bird species to be described in continental North America in a century, and it was already in trouble, its range having almost entirely shrunk to within the Gunnison Basin of western Colorado.
Continued:  http://www.nytimes.com/2013/03/07/opinion/the-plight-of-the-gunnison-sage-grouse.html?_r=0
Posted by CFZ Watcher of the Skies at 3/11/2013 10:03:00 am