Birds are target of 'inhumane' abuse

Posted - Wednesday, March 06, 2013 10:36 AM EST
This herring gull is on the mend after someone wrapped a beer can around its neck. 'Whoever did this is sick,' says Maya Totman, director of Florida Keys Wildlife Rescue.

More than a decade of working to help injured animals in didn't prepare Maya Totman, director of Florida Keys Wildlife Rescue, for what she saw on a Monday call to the Big Pine Key Fishing Lodge. 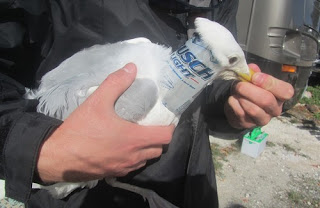 Totman arrived to find a herring gull and brown pelican weak and struggling, with deliberately cut and shaped aluminum cans of Busch Light beer shoved over their beaks and heads, then wrapped tightly around the birds' necks like tight collars.

The previous day, Totman and some fellow volunteers responded to the same location to treat an adult male osprey that had been shot with two BBs from an air-powered gun.

"I have seen so many different injuries in different type[s] of wildlife but nothing like this," Totman said. "This is shocking," she said. "It was done intentional. I'm sick about it. This is something outrageous. Whoever did this, they need some help -- completely inhumane. The poor birds were choking."

The gull was found at a campsite and the pelican nearby next to a fish-cleaning table. Fishing Lodge guest Greg Vogel cut the cans off both birds' necks with his Swiss Army knife.
The gull's head was forced through the can, but Vogel said the other can was modified to fit over the pelican's larger head.

"Somebody must have thought about this for awhile," Vogel said. "The can had a little bent clip so it could be wrapped around the pelican's neck."

But now, after a steady diet of nutrient-laden pureed grouper mixed with filtered water, the gull is set for release back into the wild as early as Friday, Totman said.

This herring gull is on the mend after someone wrapped a beer can around its neck. 'Whoever did this is sick,' says Maya Totman, director of Florida Keys Wildlife Rescue.