One of the rarest birds in the world has been released back into the wild, with help from conservationists from Chester Zoo.

Illegal poaching of the starling reduced its native population to an estimated six birds in 2001. 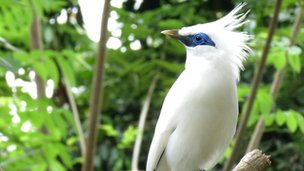 Conservation breeding efforts on the Indonesian island have seen a small recovery to between 50 and 115.

He said the release of four pairs was the first time the birds had been introduced into the wild in central .

"The area was specially picked as it was well protected and had staff able to monitor the rare birds," he said.

"Quite a crowd turned out as most people local to the area had never seen a live starling before."