Palaeontologists have discovered the first fossilized traces of developing egg cells in ancient fossil birds, showing a significant trait that already 120 million years ago separate birds from their ancestors. Like modern birds, these ancestors already had reduced their working ovaries to one, setting them apart from their dinosaur cousins. 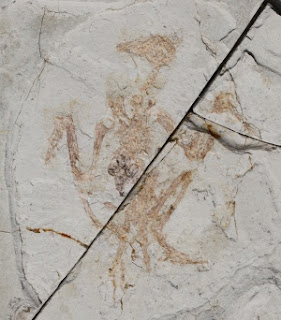 Zhonghe Zhou, a palaeontologist at the Chinese Academy of Sciences in Beijing, and colleagues studied a fossil specimen of Jeholornis — an early bird that retained archaic characteristics such as a long bony tail — as well as a pair of fossils that belong to the enantiornithines, another extinct group of birds. All three fossils, according to Zhou and co-authors, contain preserved ovarian follicles, delicate structures containing single egg cells that would have developed into eggs. The researchers present their findings online today in Nature.

“It took us a while to figure out what these strange circular structures actually represent,” says Zhou. The small structures might possibly have been seeds or tiny stones the birds had swallowed to grind food in their digestive system. But on the basis of the size, shape, and position of the rounded structures, the team ruled out the alternative explanations and interpreted them as ovarian follicles.