Rare macaws bred in Cornwall to be flown to Bolivia

Six rare parrots which have been bred in are being flown to a new life in the wild in .

The Blue Throated Macaws are heading to South America, 6,000 miles away (9,660 km) from their home at in Hayle.

It is part of a project to re-populate parrots in the wild organised by the World Parrot Trust based in . 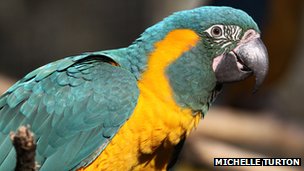 The trust said current figures show up to 120 Blue Throated Macaws live in the wild in .

'Quite a boost'
They are now only found in Llanos de Mojos in northern .

David Woolcock, the curator of , where the trust is based, said: "I can't emphasise enough how rare these birds are.