Critically endangered condors that live near the are being poisoned by lead used in ammunition, according to the Center for Biological Diversity, an environmental group. So far this year, seven out of the 80 California condors that live in the area have died, and three of these deaths have been "definitively linked to lead poisoning from ingesting spent lead ammunition fragments in carrion, and lead poisoning is suspected in the other four deaths," according to the group. 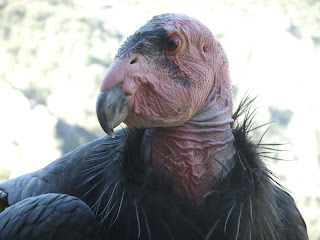 These raptors, the largest birds in , are especially vulnerable to poisoning from ammunition because they feed on dead animals, which have often been shot by hunters using lead bullets and shotgun pellets, studies on the birds have shown. The lead can then concentrate in their bodies, to devastating effect.

"Lead is dangerous to people and wildlife, even at very low levels, which is why it is critical that we take mandatory actions to remove it from ammunition and require less toxic alternatives," said Sandy Bahr, with the Sierra Club, in the statement.

condors are under continuing threat from lead ammunition fragments

Conservationists in the say that fragments of lead ammunition continue to take a desperate toll on one of the country's rarest birds.

Since December, seven wild condors from a population of 80 have died in the area.

Three of the deaths have been definitively linked to ingesting lead from bullets in the carcasses of prey.

Campaigners are calling for a ban on the use of lead ammunition on public lands.
“The continuous deaths of condors from lead poisoning is preventable, ”  Jeff MillerCentre for Biological Diversity

The California condor is one of the biggest birds but is considered critically endangered according to the International Union for the Conservation of Nature.

Carrion shooting
In an effort to save the high flying species, 166 of the birds have beenreintroduced in and since 1996.

Of these, 81 have died or disappeared. But experts believe that at least 38 of the birds have died as a result of eating lead fragments left in the guts piles and carcasses of game, shot by hunters. Condors are scavengers and mainly eat large amounts of carrion.
Campaigners like Jeff Miller from the Centre for Biological Diversity say there are actions that can be taken to reduce the risk to the birds.

"The continuous deaths of condors from lead poisoning is preventable if we finally treat toxic lead ammunition as we did lead paint and gasoline," he said.

Many of the condors require treatment each year as a consequence of lead exposure
Even though the Arizona Game and Fish Department distributes copper ammunition free to hunters, a small number continue to use lead. As a result each year up to half of the wild condors require chelation treatment to remove high levels of lead from their blood.

"It is critical that we take mandatory actions to remove it from ammunition and require less toxic alternatives, said Sandy Bahr from the Sierra Club.

"Requiring non lead ammunition for hunting on public land would be an important step in limiting lead exposure for condors and other wildlife," she added.

A group of scientists, doctors and public health experts have recently issued a statement calling for lead ammunition for hunting to be phased out.