(ISNS) -- One bird species may have advice on how to get its dads to take a more active role in parenting: mothers should build a snazzy crib.

Female blue tits that construct bigger nests and decorate them with fragrant plants have male partners that are more willing to invest in raising chicks, Spanish researchers report in the journal Behavioral Ecology. 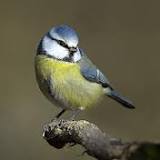 A big, well-decorated home may send a signal to males about the health of their partners, said Gustavo Tomás of the Estación Experimental de Zonas Áridas in , and co-author on the study.

Females in many animal species are often believed to be the picky sex when it comes to choosing a mate. That’s because females usually devote more time and energy than males to raising their offspring.

A female blue tit – which is about the size of an adult hand, from beak to tail – picks her partner based on his colorful blue and yellow plumage and the sweetness of his song. The better looking and sounding a mate, the better the chances he won’t be teeming with parasites and that the couple will have healthy chicks.

But the research team found that males might also judge their mates.

“It was traditionally thought that only males need to show of their quality,” said Tomás. “Now we’re revealing it’s not that simple. It’s an interaction between sexes.“

Different bird species divide the work of building nests in different ways.  Female blue tits work alone to build nests, although males may add feathers later on. That means the nest may provide a window to the female's health.