No Kakapo breeding this year due to cold weather

April 2013. Hopes for a successful breeding season for kakapo on were dashed prior to Christmas, following the discovery that, due to a particularly cold southern spring (Sounds familiar), the rimu fruit crop had been hit hard. 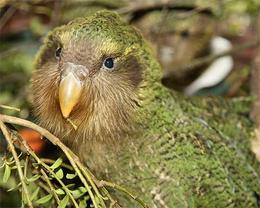 With a similar scene playing out on - home to the main breeding population - there will be no additions to the current population of 125 kākāpō. Females need to know there will be enough rimu fruit available to feed their chicks before they will mate - this year they showed very little interest at all.

New Zealand Department of Conservation staff and volunteers spent the summer season monitoring birds and identifying their territories, maintaining the trapping network on the island and surrounding islands, and working on infrastructure in preparation for future seasons when rimu does ripen and breeding occurs.