The black breasted weaver, a rare migrant bird, was sighted in the city this week after nearly a decade at Dombivli (West). Belonging to the Ploceidae family, the black-breasted weaver is rarely seen in Mumbai or its adjacent satellite cities, but amateur birdwatchers managed to catch a glimpse of some non-breeding males near the Diva-Vasai railway line. The area, they say, is something of a hotspot for birds. 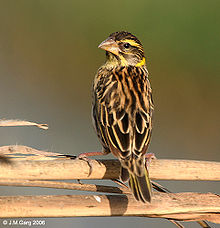 The non-breeding male weaver is distinguished by its yellow head and black neck, which turns grey while breeding. The birdwatchers spotted more than 50 of them, which experts said is a good sign as they were last spotted nesting at Uran in 2002.

While they resemble sparrows in shape, size and features, the species is not related to them at all.

“The weaver is found mostly in sub-Saharan and in the central and north Indian plains,” said Prathamesh Desai, who sighted the bird in Dombivli. “It is a beautiful bird and the males were seen in their non-breeding colours, so we are also hoping to spot a few females and their nesting site as well.”

The black-breasted weaver has rarely been spotted in the Mumbai Metropolitan Region, experts said. Naturalist Sunjoy Monga said old reports dating back to 1800’s have a record of a few pairs nesting around Bhandup.