Adelie penguin with unusual colouration.
April 2013.  Elaine Heron took these images of an apparently leucistic penguin on the that she saw in February this year. This is not the first leucistic Adelie penguin that we have had reported to us. We also have an image of a bird that was seen and photographed in 1963 on Avian Island, off on the in 1963, near the British Antarctic Survey Base by reader Mike Fleet. 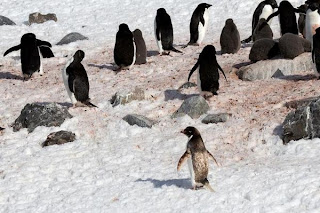 Leucism (or Leukism)
Leucism is a very unusual condition whereby the pigmentation cells in an animal or bird fail to develop properly. This can result in unusual white patches appearing on the animal, faded colouring, or, more rarely, completely white creatures.

Albinism is a different condition. The easiest way to tell the difference between the two is that in albinism the eyes are usually pink or red, and albinism affects the entire animal, not just patches.

Click here to see our gallery of albino and leucistic animals and birds.