Illegal trapping for pet trade close to wiping out the population
March 2013. Reports from the Indonesian state of West Nusa Tenggara, which contains the islands of Lombok and , indicate that the Yellow-crested cockatoo (Cacatua sulphurea) population there has reached a critical due to rampant illegal hunting and trapping for the pet trade. 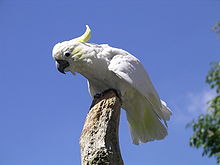 A recent survey counted just 107 birds in 2 populations. The cockatoos are very slow breeders, laying a maximum of just 2 eggs per year. So unless birds live to a ripe old age, and breed regularly, the population will continue to decline.

According to Wikipedia," Numbers have declined dramatically due to illegal trapping for the cage-bird trade. Between 1980 and 1992, over 100,000 of these birds were legally exported from ."