Bird watchers and hillwalkers are being asked to keep an eye out for hen harriers in an attempt to conserve their numbers.

The birds of prey are struggling to breed in some areas, partly due to persecution and disappearing moorland. 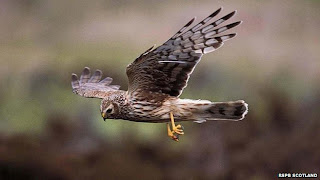 The sighting initiative is being launched by the Partnership for Action against Wildlife Crime (Paw) .

Hen harrier fact file
The male is grey above, white below, with black wing tips.
The female is much larger, and brown, with white streaks below.
The male performs the sky-dancing display to entice a female to mate with him.
has the bulk of the hen harrier population across the .

Members of the public have been encouraged to record where they spot any hen harriers, along with details including behaviour and gender.

The male hen harrier is famous for its spectacular looping "sky-dance", part of an elaborate mating ritual.

The aim is to help Paw build up a valuable bank of information to help conserve the species for future generations.

Factors in their decline include the loss of moorland nesting habitat and feeding range, eggs and young being eaten by foxes, crows and other predators, and illegal persecution.

The spotting scheme was launched by environment minister and Paw chairman Paul Wheelhouse.

He said: "The hen harrier is one of 's most fascinating birds of prey - with the male's sky-dancing display one of nature's great sights."

He added: "Unfortunately these birds are not thriving in some parts of where we know they would find a suitable habitat and we are determined to take action to conserve them.

"This initiative will raise the profile of the hen harrier to provide us with important information about their activity and location, and I hope people across will join the efforts to conserve this alluring bird for future generations."