—A woodpecker that depends on intense wildfires for the standing dead trees where it feeds on insects is being considered for protection under the Endangered Species Act.

The U.S. Fish and Wildlife Service said Monday it will take a closer look at the black-backed woodpecker. A decision is due in a year but could take longer due to budget cuts. 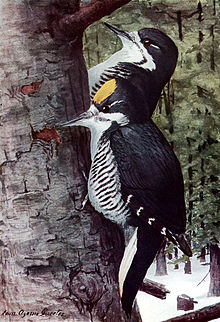 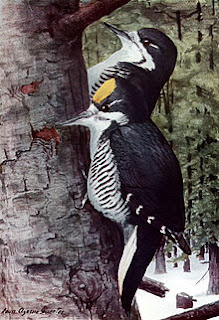 Fish and Wildlife is considering two populations of the woodpecker—one inhabiting the Sierras of California and eastern Cascade Range of Oregon, and another in the Black Hills of South Dakota and Wyoming. Another population is not under consideration.

The agency said conservation groups that petitioned to protect the birds presented substantial scientific information that they were suffering a loss of habitat because of fire suppression, salvage logging that removes fire-killed trees, and thinning to reduce the intensity of wildfires.

The decision is giving conservation groups hope the bird can force changes in national wildfire policy the same way the northern spotted owl overhauled the idea of logging old-growth forests.

Chad Hanson, staff ecologist of the John Muir Project of the Earth Island Institute, said the woodpecker has already figured in lawsuits to stop salvage logging.

"We hope as a result of this, the Forest Service will in fact not only pay more attention to species like this, but do a proactive job of educating people that when fire happens, it is not a bad thing, wildlife rely upon it," Hanson said. "These notions of catastrophic wildfire are really just politics and ignorance, and reflect outdated thinking."

Forest Service spokesman Larry Chambers said the agency's wildfire policy was not changing because the bird was not yet listed as a threatened or endangered species. He added that the agency already took "science-based actions to protect its habitat."

The agency has also said budget cuts this year will force it to let more fires burn—a prospect Hanson said would benefit the woodpecker and a broad range of species.