By Helene Jessop, Conservation Assistant, South West
The RSPB has written a piece for The Ecologist on the recent PIB seabird incident and our call for change. We’ve set out a five-point plan of what we think needs to happen, so that further tragic incidents are prevented.

To recall, between 29 January and 6 February 2013, more than 500 seabirds were killed or rendered helpless by a pollution event off the south coast of England. Many more died at sea. The pollutant was polyisobutene or PIB, which has killed thousands of other seabirds in the Irish and North Seas.

Marc Smith, Dorset Wildlife Trust, witnessed the tragedy: “It was heart-breaking seeing birds washing up along the shore. Some were so covered in this horrible substance they were stuck to the beach – still alive but unable to move. Exhausted, freezing and emaciated - they were the lucky ones. Dead birds littered the beach”. 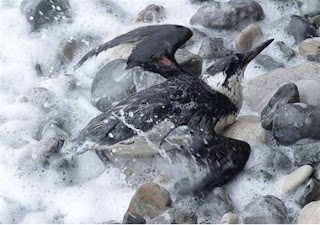 RSPB says IMO must act now to prevent another disaster

Polluting discharges at sea are regulated by the International Maritime Organisation (IMO). Yet it’s still legal with conditions to discharge PIB and other hazardous chemicals into the sea when washing out cargo tanks. The RSPB believes this must change. We’re calling on the IMO to implement our five point plan with the view to making discharges of PIB and similar substances into the sea illegal.

An urgent review of the hazard classification of PIB and other similar substances, in relation to their impacts on the marine environment.

The testing of such substances in more realistic marine conditions, which cover the full range of these environmental impacts.

The establishment of a monitoring system and central database for recording pollution incidents involving chemical substances.

Commitment to further scientific research on the effects of these substances on all aspects of marine ecosystems, as well as seabirds.

The strictest possible enforcement and prosecution of illegal discharges of any polluting substance.

See the original article here for more details, and find out about RSPB’s campaign for better protection for our spectacular seabirds at www.rspb.org.uk/marine

http://www.rspb.org.uk/community/getinvolved/b/seabirds/archive/2013/02/18/rspb-sets-out-five-point-plan-for-preventing-further-seabird-deaths-through-pib-pollution.aspx
Posted by CFZ Watcher of the Skies at 2/20/2013 10:03:00 am