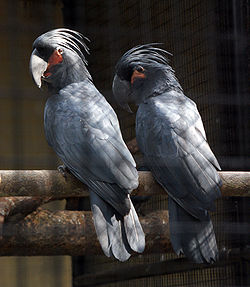 Australia’s spectacular palm cockatoo is being put at risk by proposed bauxite mines, conservationists have said.

The Cape York palm cockatoo, Australia’s largest cockatoo, is listed as vulnerable under Australia’s federal environment laws. About 3,000 mature birds are thought to exist, and their numbers are declining.

It is considered a distinct subspecies of the palm cockatoo, which includes another subspecies found in Papua New Guinea.

One of the key threats facing the bird is loss of habitat from mining bauxite to make aluminium, according to advice given to the environment minister, Greg Hunt, in 2015 by the government’s independent threatened species scientific committee.

The advice recommended that Hunt “ensure impacts from mining activity do not further reduce the amount of available breeding and foraging habitat”. Despite that, it found 85% of the palm cockatoo’s woodland habitats were covered by mining or exploration leases.