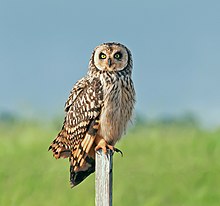 While monitoring these birds from a distance to make sure there is the least possible disturbance, the birdwatchers recorded enough evidence to confirm this record. A few weeks ago a young fledged chick was also photographed (1). The location is temporarily not being disclosed for the safety of these birds although it would be safe to state that the bird has bred in a bird sanctuary, a protected area where no hunting is allowed.

Naturalist Giuseppe Despott had noted two breeding records in the vicinity of Siggiewi and WiedZnuber on May 1906 and May 1909 respectively. Seventy four years later, in 1983, a nest with five eggs was recorded on Comino but it failed to hatch since the nest was abandoned. Short Eared Owls are bird of prey that feed on rodents mainly rats and mice and normally hunt during dusk and dawn. These birds are normally seen migrating in spring and in autumn, with a few attempting to winter on the Maltese Islands.