White storks have stopped migrating - New project to discover why? 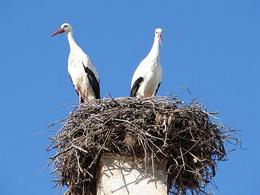 February 2013. A new project to find out why storks are changing their migratory patterns has been launched by the . In folklore, storks' strong white wings would carry babies to parents around the world. But since the mid 1980s increasing numbers of storks have stopped their annual migration from Northern Europe to for the winter. Instead, many are living in and the whole year round - feeding on ‘junk food' from rubbish dumps.

Climate change?
The project will track 15 adult white storks for a year using GPS loggers to investigate why they have changed their migratory behaviour. Researchers will investigate the link between climate change and feeding habits to predict future distribution of the species.
The birds have been caught in and tagged with loggers which will transmit five positions every day. This data will allow researchers to track the storks' movement between roosting and feeding areas and detect long and short distance flights. Each tracker will also collect information about how much time the birds spend with their heads down, foraging for food.

Dr Aldina Franco, from UEA's , is leading the project. She said: "These birds have changed their behaviour very radically. The number of storks spending their winter in has increased hugely from around 1,180 birds in 1995 to more than 10,000 in 2008 and numbers continue to grow."