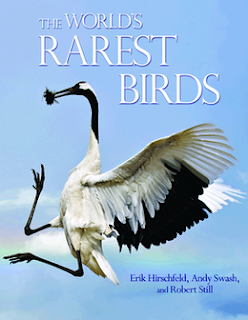 The World's Rarest Birds is a fascinating, and simultaneously terrifying, book, providing as it does in depth details of the rarest birds in the world. There are 197 species considered Critically Endangered, and another 389 Endangered species that are considered at risk of extinction, as well as 4 species that only exist in captivity (Hawaiian crow, Guam rail, Alagoas curassow and Socorro dove), and 60 species about which so little is known they are considered ‘data deficient'. There are also 18 species which, although not officially extinct, are considered by the authors to be ‘probably extinct, such as the hooded seedeater, which hasn't been seen since 1823.

Photo competition
To get as many photos as possible for the book, the authors ran not one but two photography competitions in 2010 and 2012, and many of the fantastic entries are included in the book, including some birds that were photographed for the first time. Sadly, between the first and second competitions, 23 birds were added to the list as their status had declined, though in a small piece of good news 7 were removed. There are still a large number of birds that have never been photographed, some of which may already be extinct, so Polish artist Tomasz Cofta has provided 76 illustrations to fill in the missing gaps.
The illustrations threw me completely. It took me 15 minutes to work out how such a spectacular photo could exist of the Himalayan quail, which hasn't been seen since 1876. The reason the photo is so good is that it is actually an illustration!

Macaws and parakeets are heavily represented, often due to the disgraceful pet trade.

I loved this book; I would include it as one of the top books of the year.

Will suit........ Anyone vaguely interested in birds, conservation or biodiversity (or, to an extent, trainspotting.).

WINNER OF THE WORLD'S RAREST BIRDS PHOTO COMPETITION 2012
The only known photo of a displaying white-bellied Cinclodes from .  There are no more than 250 of these birds thought to exist, and possibly as few as 50. It inhabits boggy terrain at high altitude in the , but peat harvesting has severely threatened the existence of this bird, and unless the severe habitat degradation is halted soon, the prognosis is not good for this beautiful bird.